Let’s face it, guys tend to train chest and arms more than any other body part. Even with this ambitious enthusiasm, it’s important to keep in mind that training frequency is not the only key to development. It comes down to fully understanding how a muscle operates so that you can target it effectively with your training. In this article I am going to break down chest development into the most commonly asked questions.

The chest muscles are made up of the pectoralis major and minor. The major is the larger and more superficial muscle, but the minor still makes up a part of the overall mass. The pectoralis major can be divided into upper and lower regions. The upper chest attaches to the clavicle (collar bone), thus it is known as the clavicular head. The lower attaches to your sternum, so it is called the sternal head (note that sometimes the lower head is divided into sternal and costal portions, or simply called the sternocostal head in general). The mass of the sternal head is about 70-80 percent of the pecs, while the other 20 to 30% is made up of the upper or clavicular head (Barberini, 2014). Therefore, developing a huge chest will likely be dependent on the lower head, but for a complete balanced look, you should focus on both! 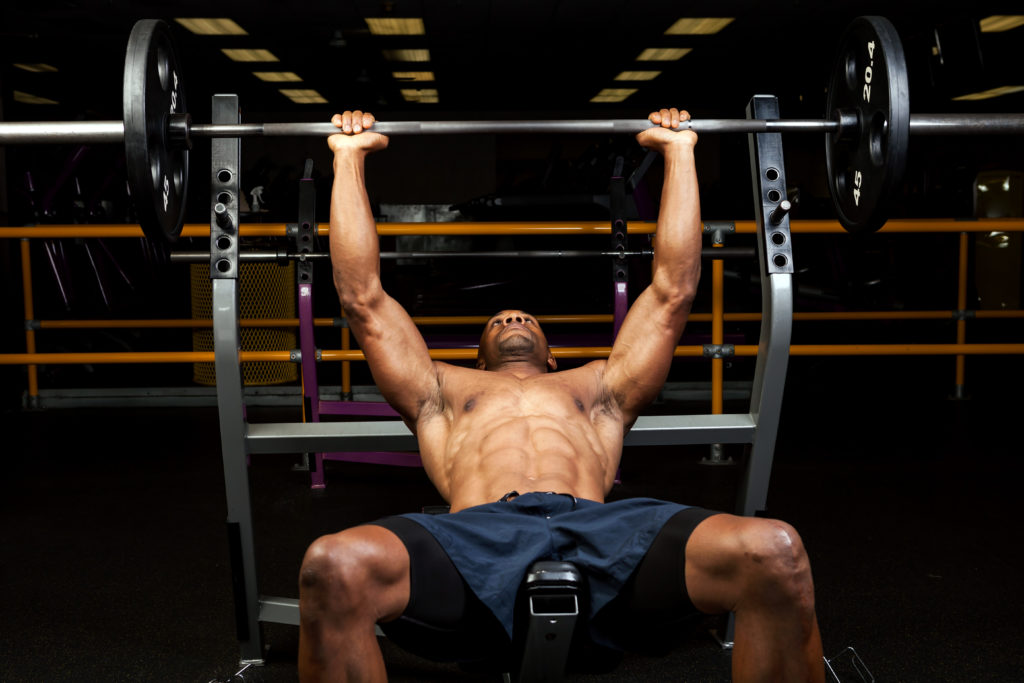 While the upper chest has several functions, its two primary movements are shoulder horizontal adduction and shoulder flexion. Horizontal adduction occurs when you give someone a big hug. Shoulder flexion occurs when your arms are at your side and you raise them straight upwards. The upper pecs have a much better mechanical advantage than the lower pecs do when it comes to shoulder flexion – keep this in mind when we design training for the upper chest! Movements that can target this muscle will occur in the transverse (horizontal) and frontal planes. Therefore, using exercises such as an incline cable or dumbbell flyes, incline dumbbell or barbell press, or even guillotine press variations are optimal to target this head of the chest. In addition, when training the shoulders with exercises such as dumbbell, barbell, or plate front raises will not only target the anterior head of the deltoids but incorporate the clavicular head of the chest, especially if you incorporate a mind-muscle connection and focus on the contraction in the pecs.

The upper chest is controlled by a different nerve than the lower chest (the lateral pectoral nerve). There are two primary avenues that research has looked at when it comes to increasing the activation of this region.

When selecting hand placement, you can use shoulder width, normal width (about 25% wider than shoulder width), and wide (> 150 % shoulder width). In one study, Barnett et al. (1995) found that a shoulder-width grip caused the greatest upper chest activation. The reason for this finding is that pressing a barbell or dumbbell with this grip width causes you to have much greater shoulder flexion than a wider grip. Remember, the upper chest has a better mechanical advantage than the lower chest for flexion, making shoulder-width or even close grip optimal for upper chest development. You can increase shoulder flexion demands on exercises like cable crossers by placing the cables lower, thus forcing you to raise the handles while crossing over.

When it comes to pressing angle in the bench, research shows that a moderate incline bench press maximizes upper chest activation. This occurs anywhere between 30 degrees (low incline) and 50 degrees (moderate incline) (Barnett et al., 1995, Lauver et al., 2015, Trebs et al., 2010, Luczak et al., 2013). Anything above this will place the load away from the upper chest and primarily onto the shoulder muscles. Lower inclines might be more suitable for those with previous shoulder injury or currently experiencing shoulder discomfort – this can still help develop the upper pecs without worsening symptoms of pain.

The primary function of the sternal head of the chest is horizontal adduction (again hugging motion). This head also extends the arm in front of you. This means that if you were to raise your arms to eye level, the lower pecs could bring them back down to your side. While both the upper and lower chest horizontally adduct the chest (hugging motion), the lower appears to be activated to a greater degree the more this motion is emphasized. Lehman et al. (2005) conducted research that showed a wider grip (150 degrees or greater of shoulder width) activates the lower chest more. The reason likely is that this position enhances the amount of horizontal adduction that occurs compared to a closer grip bench. Finally, the lower pecs have been shown to have high activation on the flat bench, and greatest when you perform decline bench (Lauver et al., 2015). Since the lower pecs also extend the arm, exercises like dumbbell or barbell pullovers can also be useful for developing the lower pec – especially if you emphasize and focus on the pecs during this exercise as the lats and serratus can also play a role.

For Full Chest Development is Incline, Flat, and Decline Enough?

High level bodybuilders have known for a long time that you need to train multiple pressing angles to optimize pec growth. Does this stand up to the science? Yes! In fact, Dr. Fung and colleagues (2009) performed a study where they took cadavers and created a 3D image of the chest muscles. They found that it could be divided into 8 functional segments. Specifically, the upper chest was treated as one, and the lower as seven!

Earlier I suggested that, in general, incline bench is ideal for the upper pecs and flat and/or decline for the lower chest. In reality, you should still hit at least one unique angle in between during every training session! I especially like angles of low incline or low decline – instead of changing the angle on the bench, I might just place a bumper plate under one end of the bench to give about 10-15 degrees of incline or decline. These variations also feel great and trying slightly different angles keeps training interesting.

Compound movements for the chest include any kind of pressing exercise that involves motion at both the elbow and shoulder – this includes bench press variations, dips, push-ups, etc. The bench press (barbell or dumbbell) and variations thereof generally form the basis of any chest building program. Intriguingly, research shows that, during a bench press training program, the pectoralis size increases to a greater extent with increasing strength as compared to the triceps and shoulders (Ogasawara et al., 2012). This seems to confirm that the chest muscles are the major muscles responsible for moving the bar during these pressing movements. However, it is important to realize that as long as you are performing a pressing movement, all variations of bench press seem to activate the pecs equally, given the relative weight lifted is similar (Calatayud et al., 2015). The take home message is that you should use each of these variations to avoid any plateau in your chest development! This is also useful when working around shoulder issues as dumbbell and machine variations are typically more friendly to the shoulders – you can still make wicked chest gains with bad shoulders, just pick the right exercises and equipment!

Are Isolation Movements Effective for the Chest?

According to electromyography studies (which measure muscle activation) the answer is YES! As surprising as it sounds, movements such as dumbbell and machine flyes have been shown to activate the pecs to the same degree as pressing movements (Welsch et al., 2012). The advantage to using isolation movements is that they are less centrally fatiguing since they don’t involve as many total muscle groups as a compound exercise. Thus, we recommend using isolation movements on your hypertrophy and recovery days as a way to increase chest size without impairing recovery to a large degree.

How Heavy Should I lift and What is the Best Tempo? 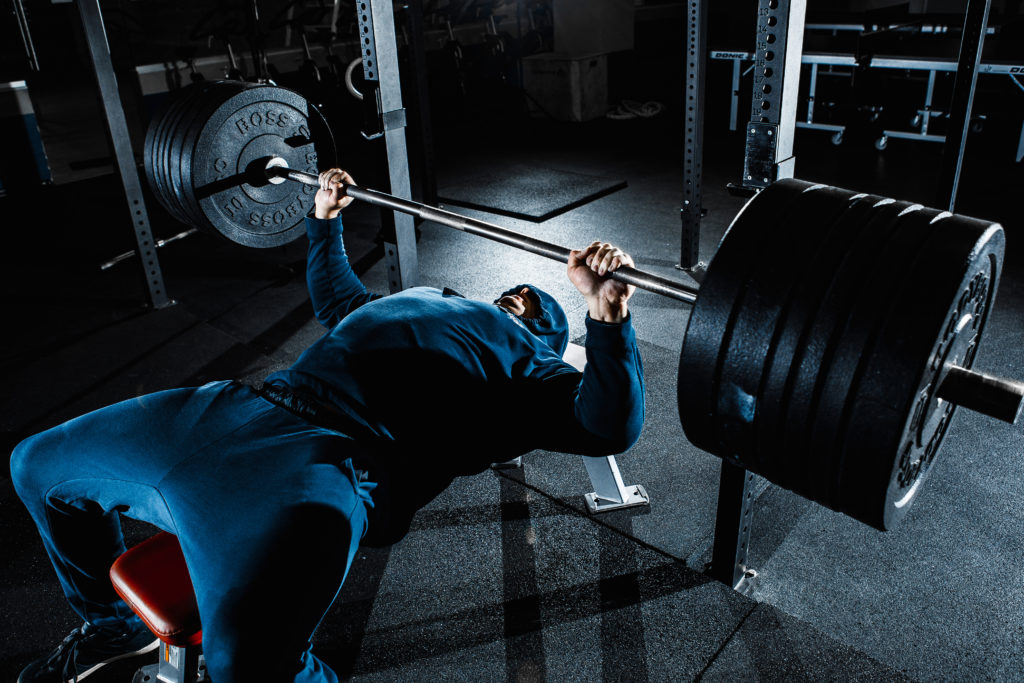 The pectoralis major is made up of a higher proportion of type II muscle fibers (57-65 % fast twitch in the literature (Srinivasan et al., 2007; Johnson et al., 1973). Fast twitch muscle fibers are worked ideally with heavier loads. Research using EMG has assessed muscle activation using loads from 60% of 1RM to maximal. In doing so it was found that muscle activation was near maximal at 80% 1RM (Sundstrup et al., 2012). As such, relatively heavier loads (>60%) and lifting at a speed you can control the weight may be ideal. I say this with one caveat, remember that once pec growth slows you may need to start adopting some very high repetition sets if you are to maximize pec growth. Slow twitch muscle fibers grow ideally under very high rep loading schemes (50% 1RM until failure) (Schoenfeld et al., 2013).

We’ve all heard the stories of athletes like Bo Jackson and Herschel Walker getting a huge chest by doing pushups every day. More recently, Tampa Bay Rays break out star, Randy Arozarena, also credited his significant muscle gain during a COVID-19 quarantine to performing 300 push-ups every day. Are push-ups enough to develop massive pecs?

The previous examples are, of course, all phenomenal athletes. However, copying the training programs of the top .01% is useless for the other 99.99% of us. Based on the research, bodyweight pushups, unless you are not well trained, will not provide a great enough load to maximize chest development. In fact, in a trained population you may only get 30% maximal activation of your pecs (Lehman et al. 2006). Thus, while push-ups may serve a solid role for hypertrophy in the slow twitch muscle fibers, you will likely need a loading mechanism to use them for maximal growth. Fortunately, studies show that when you do heavier banded pushups that you can activate the pecs similar to movements like the bench press (Calatayud et al., 2015)!

Lastly, since the pecs are primarily fast twitch, this means that they’ll probably take longer to recover from hard training. Indeed, research shows that the pecs are actually the slowest muscle group to recover from a hard workout (Chen et al., 2019). This means that you should probably plan on at least 3-days of rest between hard chest workouts to ensure appropriate recovery before getting back under the bar. In my experience, chest is one of the few muscle groups I can still consistently get sore after 20+ years of training. Give your pecs time to recover!

This article sought to assist you in building the best chest possible. We covered several questions and I believe can summarize them with the following practical applications

The chest is a complex muscle group. As with any muscle group they will require an equally complex strategy to optimize growth. While your program should center around the basics, you will likely optimize growth by using multiple angles, and a combination of free weights, machines, isolation movements and rep ranges! Remember, as discussed in other articles, you will need to intelligently periodize these strategies!